I was listening to one of Bill Simmons’s podcasts recently while he was talking about Russell Wilson, a superb NFL quarterback who has apparently has never received an MVP vote despite performing excellently for many years. In the discussion, it was decided that arguing for Wilson receiving vote(s) at some point in the past is pointless because what should someone have done, voted for the wrong guy? Surely not!

That idea stuck with me for a while, and finally it occurred to me that we probably shouldn’t be asking whether Wilson ought to have ‘taken’ votes from an MVP winner. Most years don’t have unanimous winners, so looking over the list of non-MVP players receiving votes is a better measure. I did some ‘research’ (OK, I googled) and came up with this figure, which tabulates NFL MVP voting over the past five seasons: 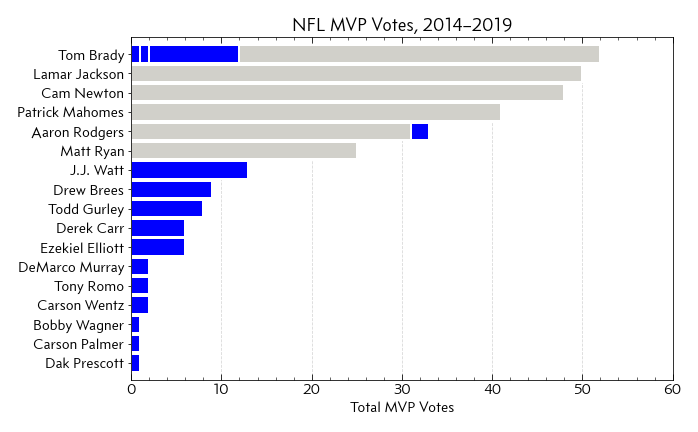 Ear bar segment counts the number of MVP votes a player received in a year. I’ve highlighted in blue the votes received by players who did not win MVP and I’ve broken those numbers out into the following table:

If the NFL MVP voting isn’t typically unanimous, then, instead of asking whether Russell should have gotten votes destined for Patrick Mahomes or Lamar Jackson, maybe instead we could ask whether he should have received as many votes as, say, Carson Palmer. Yikes.

The data and code used to write this post are available on GitHub.